Bare Naked Body natural hand and body soap has been selling like hotcakes! I hand craft each batch of liquid soap with Margaret River olive oil and luxurious coconut oil – that is all. It makes a fabulous, mild, cleansing and soothing liquid soap and  lathers well, without leaving a gel-like residue often found with commercial liquid soaps.
I have been making cold process soap for many years now and at the beginning, the thought of making liquid soap was quite daunting. Now that I have been making liquid soap for over two years and I actually think in some ways it I prefer it.
The only similarity  to cold process soap is that in liquid soap you also add lye to oils. With liquid soap, it takes a much longer time to trace (particularly the liquid soap I make, which has a large amount of Olive Oil) which can be up to one hour. Then you need to cook the soap in the crock pot after it has traced. The whole process takes around four hours and you have to stir the cooking liquid soap every 20 to 30 minutes. I quite like being at home and doing other bits and pieces while I watch my liquid soap, stirring occasionally. Maybe it is because I love being at home… 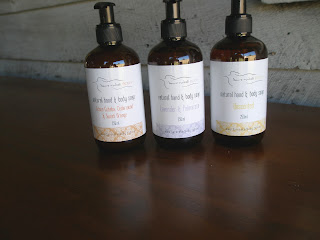 I like the warming of the crockpot, the stirring of the gel/toffee like liquid soap and the relaxed pace at which the whole process moves. Cold process soap can often trace quickly and you really have to move fast to add clays and essential oils and then pour into the mold and then achieve the right pattern or look. On the other hand, I find making liquid soap serene, relaxing and very grounding.
Once the liquid soap paste is cooked and tests clear, it is diluted to form the liquid soap. I like to dilute very slowly to achieve a lush, golden liquid soap (which reminds me of honey). 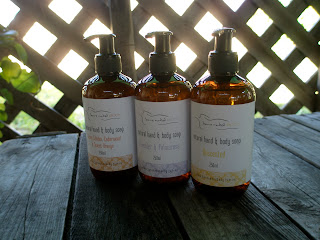 I make three varieties of hand and body natural liquid soap, the most popular being Refresh, which is zesty with Litsea Cubeca, Sweet Orange and Cedarwood essential oil. My personal favourite is Lavender and Palmarosa and then I have one unscented, which people can scent themselves, or for those with sensitive skin.

Lotion making – so much fun!

I love natural body lotion and being able to make my own, is just sooo much fun! I use all my favorite ingredients including Evening Primrose Oil, Borage oil, Sweet almond oil and Jojoba oil, this lovely lotion will soothe and moisturise my Winter skin.
I have lotion pump bottles ordered and arriving shortly, meaning luxurious Bare Naked Body lotions will soon be in stock!
Posted by Bare Naked Body at 05:30 2 comments:

Mmm... hopefully, soon, I can add some of these into the product range.

Firstly, my camera is out of action at the moment so I apologise for the lack of photos.
I have been asked to make sugar and salt scrubs for quite a while now and I finally have all the ingredients and can start whipping some up.
I enjoy making products that I enjoy using, first and foremost and usually, most other people like them as well!
My sugar scrub contains unrefined organic shea butter, mango butter sweet almond oil, rice bran oil, olive oil, making for a super nourishing blend of natural, skin loving ingredients. I also use only the highest qualify essential oils for scent and natural clays for colour… so good.
I used the Lavender / Bergamot salt scrub in the shower tonight and let me tell you, it is heavenly!
Stay tuned for more updates soon.

Lisa xo
Posted by Bare Naked Body at 19:28 No comments:

Many of us crafters are preparing for Christmas and Festive season already. Soap has a four week “curing period” in which the chemical reaction takes place, all chemical leaves the soap and the soap bars harden up. So, I have to give a lot of thought to keep up stock levels for wholesale orders, markets and my loyal customer base.
So, back to the soap kitchen for me and on the agenda today – Goats Milk and Lavender. Made with local Busselton Goats’ Milk, Margaret River olive oil and Lavender essential oil, this is a creamy bar of soap, which soothes skin and smells devine. By far, it is one of my best sellers and personal favourites.
Lisa xo
Posted by Bare Naked Body at 19:27 No comments:

Finally, I have saved my pennies and invested in a custom soap cutter ! Now all Bare Naked Body soap bars will be uniform in size... 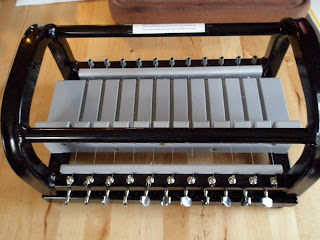 I am officially in Love !

Here is as example of the stunning bars they cut - 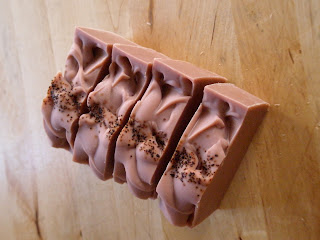 
Part 2 of the experiment was infusing the oils with madder root and alkanet and then using the infused oils to make soap. Here is a picture of the jug used to make the Alkanet root powder infused soap (yes, I know the jug is red – after lots of small batch soap making recently, it was all I had available, as I usually use white jugs!) I was so excited to see the lush purple hues come through - naturally! 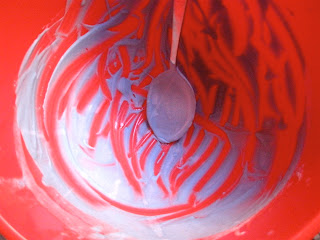 I could not wait to unmold the infused oil soaps! 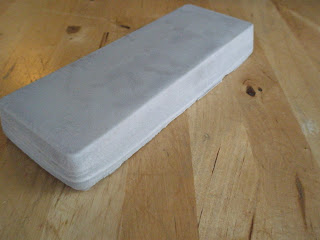 It does look a little more mauve in real life, but not Purple and definately not as purple as what was in teh jug above. I think I might need to insultate a little more to ensure the soap goes through gel to bring the colour out. It is winter in Australia and rather cold! Still, I do love the Alkanet Root Powder soap and the depth of the colour, however, I wonder whether it will lather purple? I will let this soap cure for four weeks and them report back, as to the colour of the lather. 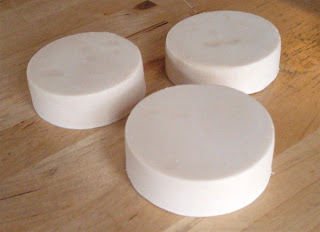 The Madder Root Powder infused soap is lovely, but again, for this kind of colour, I do prefer the warmth that I achieve with natural clays.


VERDICT – I will not be introducing Madder root powder into Bare Naked Body soaps, as I prefer the depth of colour and effect I achieve with Clays.


I will be doing further experiments with Alkanet Root Powder infused oils and soaps as I really want to achieve a natural purple colour! Stay tuned for further purple soap soon!

Posted by Bare Naked Body at 20:44 No comments:

Bare Naked Body
Natural, luxurious, artisan Bath and Body products... because your skin wants to be Naked... Our products are handcrafted in Western Australia using sustainable and where possible, local ingredients.

Skin care for your soul

Bare Naked Body is committed to natural and luxurious body and bath products.

Why? Because your skin wants to be Naked. You can have sensual, soothing and nourishing body products without chemicals and artificial ingredients - because you don't need them. 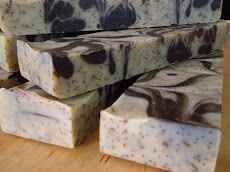